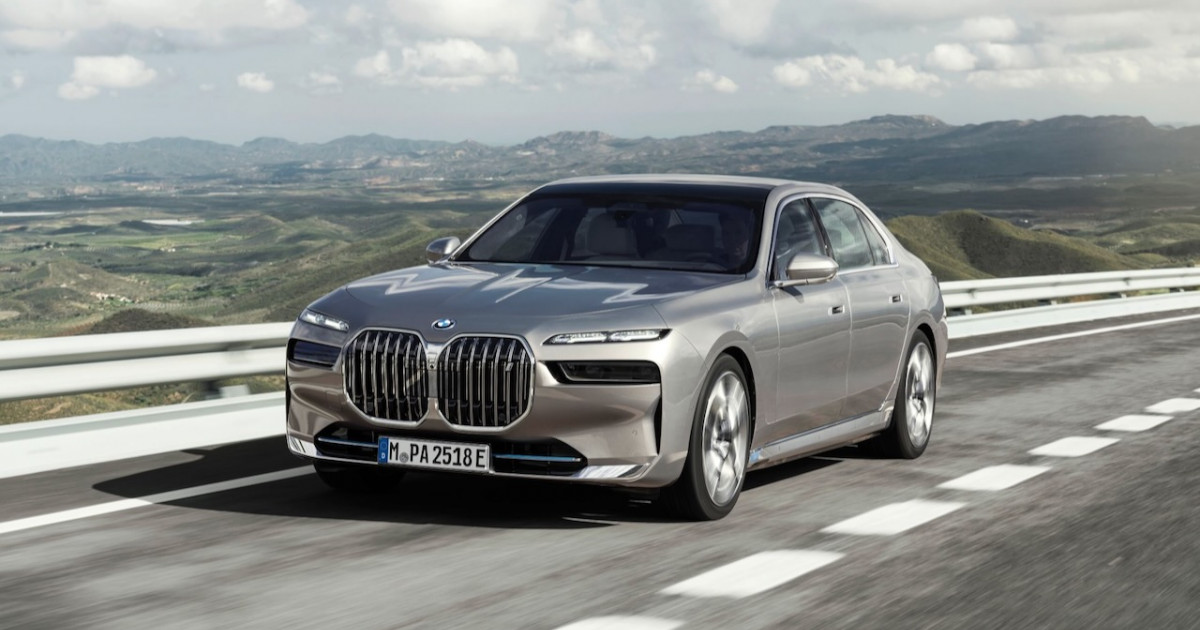 Time passes and trends change, which is why it is essential to reinvent yourself in the automotive industry. This translates into the irruption of new cars that promise to be the reference within their segments for the coming times, and at AutoUsaPremium we are always looking forward to what awaits us in the form of vehicle models that may surprise us.

For this reason, along the following lines, We are going to talk about the BMW 7 Series, a saloon that arrives on the market ready to throw the Bavarian brand behind its back. Many speak of this car as a luxurious and comfortable car in equal parts, but let’s kill our curiosity by telling all the details and secrets that make it special. You will surely be left speechless.

Once we have put the BMW 7 Series in context, it is the ideal time to get to the point and analyze its benefits from the 5 aspects that usually guide us in our reviews: exterior design, mechanical structure, internal equipment, price and comparison with a similar vehicle that moves in the same market niche. Let’s go there.

To talk about the BMW 7 Series is to talk about a saloon that, as its name indicates, has been going for 7 generations.. What distinguishes it from the previous ones lies mainly in a more technological interior, new engines and aesthetic touch-ups with which it intends to surprise users.

If you look closely at its design, you can see that the front takes some straight forms, its double circular headlights have undergone a redesign, with much less thickness and more finesse in its look. The upper section is responsible for providing daytime lighting, as well as turn signals and position lights, while the lower section is responsible for the main lighting.

The grill does gain in size, although it retains its double kidney shape, contributing to that aerodynamic coefficient of 0.24. Here it presents adaptive LED headlights that come as standard, while the low beam and high beam headlights are located in darkened units, specifically in the lower area of ​​the front apron. At the rear, however, a more continuous line is followed in the shapes, with thin and three-dimensional LED lights that are arranged horizontally. Here is a bumper that accentuates the width of the car.

On the sides you can see a sober and elegant appearance, with few lines of style that mark the shapes of the body. It must be said that, depending on the version in question, the windows can exhibit chrome or black frames. What does not change in any case are the electronically operated levers.

The alloy wheels that accompany its wheels range from 19-inch as standard to 22-inch on the highest trim level. To end this point, it should be noted that its dimensions are 5.39 meters long, 1.95 meters wide and 1.54 meters high. To these dimensions we must add a wheelbase estimated at 3.21 meters.

Electrification gains importance in the new BMW 7 Series, so that it is available with up to 4 different engines. However, all these engines have in common the fact that they coexist with a new 8-speed Steptronic automatic gearbox, adaptive air suspension on both axles and all-wheel drive. Let’s see the versions one by one.

Access to the range is embodied by the diesel variant, named 740d xDrive, accompanied by 6 cylinders arranged in line, it is turbocharged and develops 310 HP of power, with a maximum torque of 670 Nm. It has the ability to go from 0 to 100 kilometers per hour in 6.3 seconds and its top speed is 250 km/h. It approves an average consumption of between 5.9 and 6.9 liters for every hundred kilometers traveled.

The first of the hybrid versions receives the nomenclature of 750e xDrive, which also has a gasoline engine arranged with 6 cylinders in line and is turbocharged, although it has 310 HP of power and a maximum torque of 450 Nm. It is associated with another electric 200 CV and 280 Nm of maximum torque which, together, translates into 490 CV of power and 700 Nm of maximum torque. That said, its acceleration from 0 to 100 km/h takes place in just 4.9 seconds and its top speed is electronically limited to the same 250 km/h as the diesel.

The most performance hybrid is the M760e xDrive, which has the same 6-cylinder engine as the previous unit explained but with adjustments to its electronics, which provide it with 380 HP of power and 520 Nm of maximum torque. The electric that accompanies it is also the same, but the joint power shoots up to 571 HP of power and the maximum torque up to 800 Nm, in addition to accelerating from 0 to 100 km/h in 4.3 seconds. It also enjoys the same top speed.

It is important to know that the batteries of its two hybrid units contain 18.7 kWh of capacity, which translates to an autonomy in electric mode between 78 and 87 kilometers in the first and between 77 and 85 kilometers in the second. At the top is its electric version, the i7 xDrive60, with a power of 400 kW (544 hp) and a maximum torque of 754 Nm. Its battery has a capacity of 101.7 kWh that approves a range in the WLTP cycle of between 590 and 600 kilometers. Its acceleration from 0 to 100 km/h takes 4.7 seconds to produce and its top speed is slightly lower than the previous ones, with 240 km/h.

The passenger compartment is the point that concentrates the most noticeable innovations of the BMW 7 Series compared to its predecessors.. Mainly, it has fewer buttons and knobs thanks to the push that digitization has received. The main adjectives that define the interior of this car are luxury, comfort, warmth and elegance.

The first thing that can be seen as soon as you enter it is its BMW Curved Display system made up of two monitors: the 12.3-inch instrument cluster with driving information and the 14.9-inch infotainment system. Both are housed together behind the glass surface that curves towards the driver. The head-up display enjoys new graphics and augmented reality breaks into the infotainment screen.

This great set of infotainment + instrument panel has 8K resolution, webcam, 128 GB internal hard drive, Bluetooth headphones and different display formats. Passengers also have other 5.5-inch touch screens in the door panels, so they can make calls with the car’s audio system.

As a detail, it should be noted that the instrument panel has undergone a redesign with fine wood trim, enjoys stylized air vents and a strip of backlit ambient lighting. Another novelty is the lever to choose the gears, which accompanies the control panel on the center console.

The materials vary depending on the level of finish chosen: the Venganza upholstery enjoys properties similar to leather, although it is more respectful with the environment and is available in 4 colours. Optionally, there is the BMW Individual, which uses Merino leather, as well as the BMW M Sport, with up to 5 different colors. If you want to go further, there are 2 extra options that mix Merino leather in two different shades, or the same material with cashmere wool, which makes its debut in this car.

The BMW iDrive operating system is updated with new functions such as the intelligent personal assistant and video-on-demand streaming with YouTube integrated into the central infotainment screen. The doors can be opened and closed automatically if desired, for this it must be activated with the presence of the driver or by pressing a button. Finally, it has an interior camera that allows you to take photos and pass the images of the passenger compartment to the user’s mobile.

In Spain the prices of the BMW 7 Series are unknown. Not surprisingly, it will be in 2023 when it hits the market. In any case, to get an idea, just take a look at what you can buy in your native Germany: 114,300 euros for the diesel unit and 123,500 euros as a starting point for the plug-in hybrids. It is not known about the electric company, but logically it will have a higher appraisal than those announced.

After this detailed analysis of the BMW 7 Series, it is a good idea to compare its benefits with those of another car in its market niche. The chosen one is the Mercedes-Benz S-Class.

The Stuttgart saloon is also in its seventh generation, as it also offers a wide technological repertoire inside its cabin. Where it does differ from our protagonist is its offer of two different bodies that vary its length, so that it can be 5.18 or 5.29 meters long, shorter in any case, although its wheelbase is slightly longer with its 3.22 meters. Of course, it is wider (1.98 meters), but lower (1.50 meters).

Its aerodynamic coefficient is better, with 0.22 Cx, and the storage capacity of its trunk is greater with 550 liters than the BMW versions. Its LED headlights are tri-band. Its base price in Spain is lower, with 108,400 euros, but it is also higher than its top of the range with 142,900 euros. The EQS is cataloged separately, unlike what was done by those from Bavaria, grouping it with the rest. The EQS can go up to 175,768 euros at its most sophisticated level, so we will have to see how the i7 is priced.