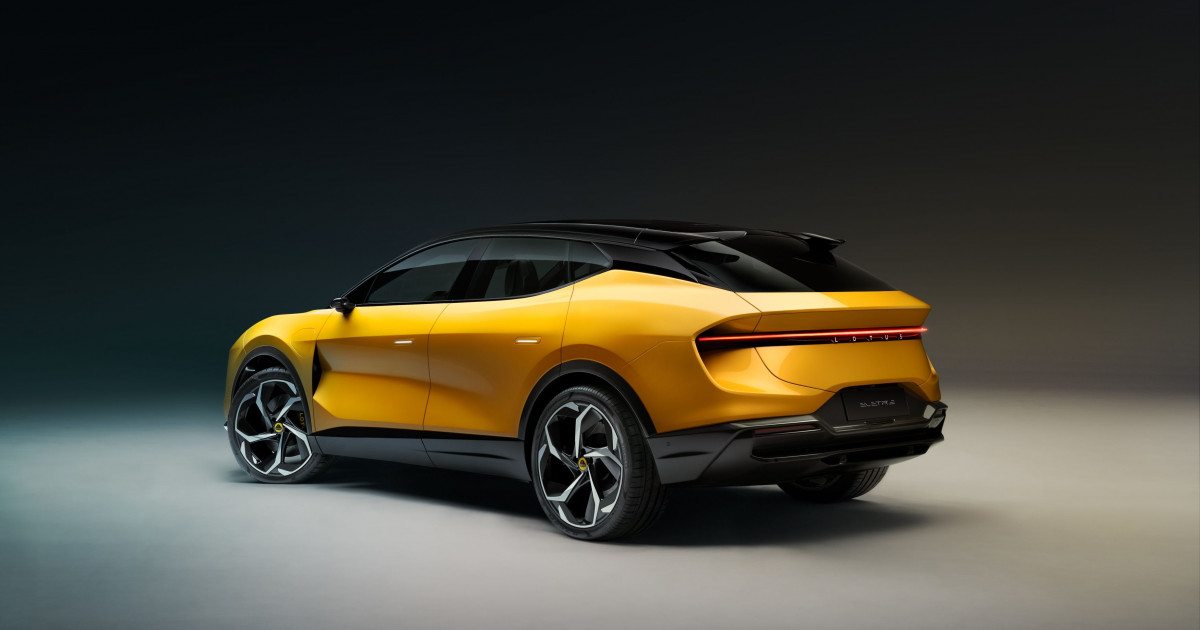 More and more luxury and super sports brands are betting on SUVs and electrification. Sustainability and bodies with a high driving position and everything that entails are in control these days, and over the next few lines we are going to talk, for the first time, about an illustrious name that had not appeared here until now.

Taking advantage of these trends and the fame that the brand in question has, at AutoUsaPremium we are going to talk about the Lotus Electro, the first fully electric SUV from this legendary manufacturer that became well-known in the Formula 1 World Cup and that has dedicated its efforts on the street in making the best super sports cars possible. Will it be the before and after that it promises to be? We’re going to find out.

Once the introduction of rigor has been made, it is time to get down to business and explain everything that Lotus Eletre offers from the 5 key points with which we usually approach vehicle reviews: exterior design, mechanical structure, internal equipment, prices and comparison with a similar model with which it competes in the market.

The Chinese company Geely intends to return Lotus to the place it deserves in the automotive world and has opted to bring to the market what is, in turn, Lotus’ first 100% electric SUV. Framed in the F segment, the Eletre is a large car physically speaking, with a length of more than 5 meters and a wheelbase that exceeds the 3-meter barrier. Its width is not small feat either, since it is above 2.10 meters without counting the mirrors.

Despite how imposing it may be due to its size, the truth is that it exhibits a more modern look, but also a certainly aggressive look thanks to its stylized boomerang-shaped headlights located on the hood, as well as those hidden through the grill and into the side air intakes just below.

The calender draws attention due to the fact that it has an active lower one, hexagonal in shape and made up of six triangles that open or close with the purpose of optimizing the cooling of the battery and the aerodynamic performance of the car. Looking at the car from the side, the view is very powerful thanks in part to the glass surface, although not too large, which has an upward trend.

Here, the black skirts, its high waist and the 23-inch alloy wheels that carry their wheels on board also play an important role. The technological mirrors that it carries and the flush door handles give it a technological and premium character. The rear is even more surprising with the horizontal LED light band that joins its elongated optics and is accompanied by the word Lotus and flanked by two air vents reminiscent of the Evija. Aerodynamics is the axis on which this rear part is structured, with a rear window that falls very horizontally, an aggressive spoiler and a cut that accommodates that already mentioned band.

mechanically speaking, the Lotus Eletre consists of two electric motors spread over the two axes. These propellers provide a combined power of 600 CV and 710 Nm of maximum torque in the standard and Eletre S versions. Things change at the top of the range, the Eletre R, which goes up to 905 CV and 985 Nm through a two-speed electric gearbox.

The whole is founded on the new Electric Premium Architecture (EPA) platform, which is made of aluminum and high-strength steel with the sole purpose of supplying the models powered with electricity. In addition, it can accommodate a very flat 112 kWh lithium-ion battery pack that hardly changes in the three available versions. That said, it approves a range of 600 kilometers in the WLTP cycle, with the exception of the Eletre R, which has to settle for 490 kilometers.

The physiognomy of this platform allows it to enjoy a low center of gravity and very dynamic behavior, so dynamic that it is capable of accelerating from 0 to 100 kilometers per hour in a matter of 4.5 seconds in the Electre and Electre S, while in the R record is shortened to 2.95 seconds. Top speed is about 265 km/h.

In any case, performance and autonomy can be customized through the different driving modes. With regard to charging, you can opt for the fastest option thanks to its 800 volt socket, which provides 400 kilometers of energy using a 350 kW fast charger in a short period of time of 20 minutes. It should be noted that the user can opt for a more conventional load of 22 kW in alternating current.

The interior of the cabin of the Lotus Eletre also represents a change of trend on what was customary in the English brand until not too long ago. That said, if something characterizes this car from the inside, it is digitization and futurism.

Now to start, a 15-inch OLED screen takes center stage in the middle of the driver and passenger seats. On the left, in front of the driver, there is a small display located in the place corresponding to the instrument panel. As a reference, they have a light band that runs along the dashboard and that changes color based on the type of information displayed by the monitors. Ambient lighting also contributes to this technological atmosphere.

The finishes and materials chosen for its preparation have enjoyed a lot and a good touch. Satin colors and light tones predominate in them, and carbon fiber is even present. These materials are recycled and their treatment has consisted of giving them the most premium image possible. The dashboard exhibits modern shapes and the seating configuration offers two options to the customer: 2+2 or the conventional 2+3.

In the first one, passengers will also be able to enjoy a large touch screen on its center console.. On the other hand, the repertoire of driving aids is very wide, including adaptive cruise control, emergency braking, front and front cross traffic alert, assisted lane maintenance and change, sign reading , etc.

It is important to say that in those parts of the world where it is legal, their mirrors are replaced by cameras. To be exact, there are three cameras on the supports: one to play the role of rear-view mirror, another to support parking, and the third to support semi-autonomous driving systems. To end this point, it should be noted that it has wireless charging for the smartphone, its own APP in order to know the status of the car and the option to add OTA updates periodically so that it is always up to date thanks to technology 5G.

The starting price of the Lotus Eletre is about 95,990 euros, quantity that corresponds to its standard version. If you pay attention to the S and the R, you can see that their appraisal is significantly higher: 120,990 and 150,990 euros respectively.

Once we have carried out the in-depth analysis of the Lotus Eletre, it is a good time to compare its benefits with those of another similar vehicle that moves in the same market niche as it. For this time, the chosen one is Lamborghini Urus.

The Lamborghini Urus has been manufactured by the Bologna brand for more than five years, and in that time it has earned the status of best-selling car, with more than 10,000 units in less than the first three years of production. Unlike our protagonist, it does not have an electric version, although a hybrid unit will be released on the market in the future. That said, it is powered by a 4-litre twin-turbo V8 engine and develops 650bhp of power at 6,000rpm and a maximum torque of 850Nm. It is more powerful than the Standard Lotus Eletre and S, but less powerful than the R.

It can also boast a top speed of more than 306 kilometers per hour. However, with the environmental restrictions that come, the possibilities of mobility in it are reduced. In its design, air intakes abound and it presents Y-shaped LED lights, and a coupé silhouette is palpable thanks to a pronounced drop in its roof due to its marked shape. Inside, it also offers both 4- and 5-seat configurations. Of course, its interior does not breathe so much futurism since, for example, its two screens are more conventional and not as large as the Lotus central.

The infinite possibilities offered by its 7 driving modes and the exquisite materials that it also uses, in addition to the great performance that it claims to have, may be the reasons that explain its enormous valuation and price range between €165,000 and €240,294. That said, if you’re looking for thrills, the Urus is a better option, but if you prioritize the balance between features, equipment and mobility, the Eletre is preferable.